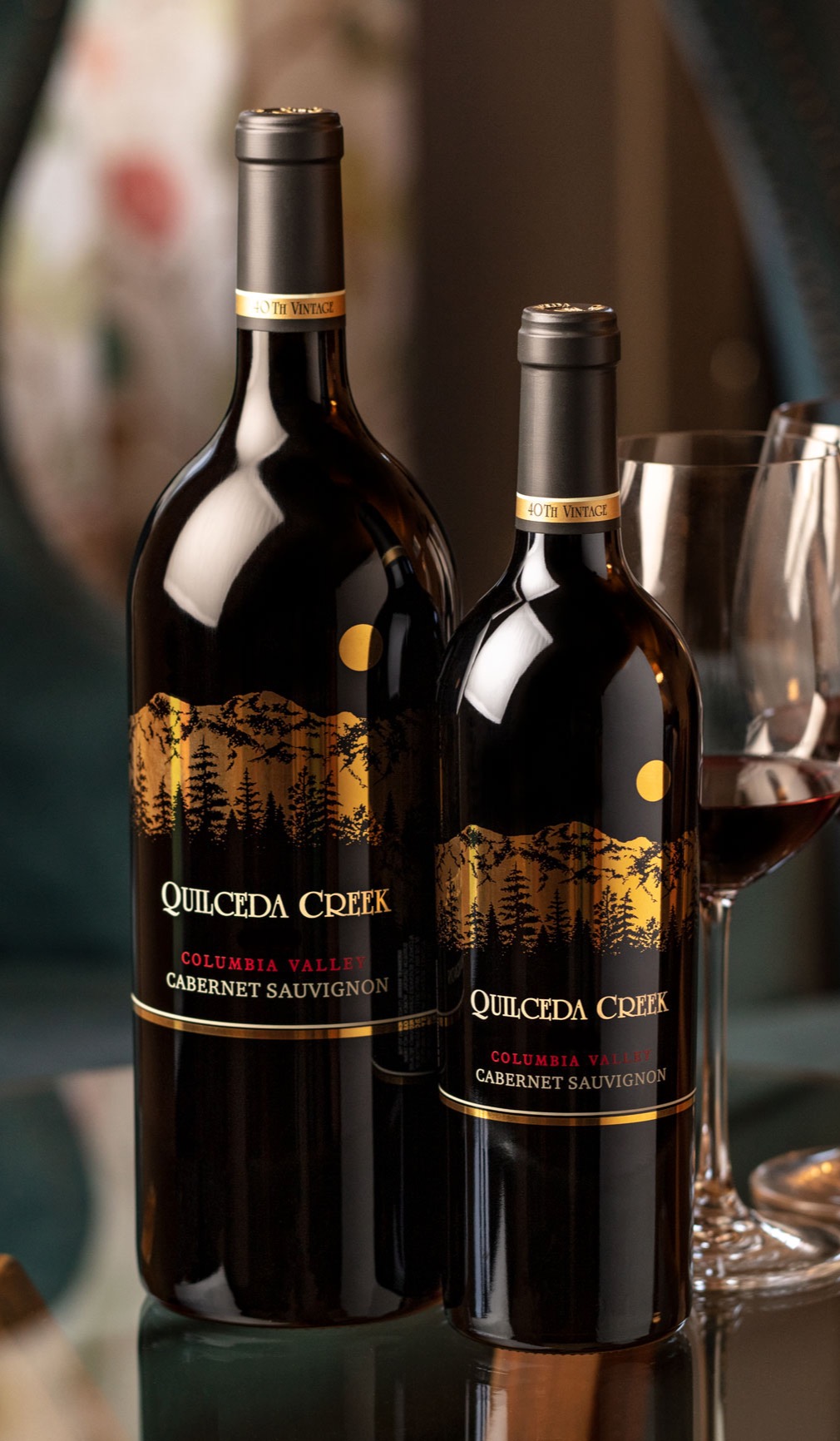 This wine — opulent, complex, and compelling — showed remarkable purity and focus from release. Powerful blackberry, blueberry, plum, and black currant fruit lead the way, with nuances of chocolate, Asian spice and lavender and rose petals. Its texture is completely seductive, intertwining each of its components until the end of the finish.

A late bud break, a small heat spike in May, and scant precipitation stressed the vines in a constructive way and delayed the bloom for two weeks. Then a warm, sunny, and dry September allowed even ripening of the fruit. After strict grading and selection, we produced an extraordinary Cabernet Sauvignon that will age for more than 25 years. It is made with 98 percent Cabernet Sauvignon and 2 percent Merlot, sourced from the Champoux, Klipsun, Palengat, and Tapteil vineyards.

"The 2008 Cabernet Sauvignon Columbia Valley is made up of 88% Champoux Vineyard Cabernet Sauvignon (Quilceda Creek is a partner in the vineyard), 10% Red Mountain Cabernet, and 2% Merlot from the Palengat Vineyard. As good as the Palengat cuvee is, the flagship Cabernet Sauvignon Columbia Valley takes it to another level. A slightly brooding bouquet displays aromas of sandalwood, exotic spices, incense, violets, and wild berry notes. On the palate it has extra layers of fruit, exceptional complexity, impeccable balance, and a 60-second finish. At Quilceda Creek it's the same old story, great wines made by unpretentious people. The Golitzins decline to raise prices because they feel loyal to the people who supported them from the beginning and who might not be able to afford connoisseur/collector pricing. As for the latest wines, they regard 2008 as "a regular vintage with no issues; you could pick at your leisure". They are considerably more excited by the 2009 vintage which they describe as "wines with tons of aroma - really good" which, given their understated manner, I interpret to mean really terrific. For this tasting, the 2009s were all tasted from barrel samples. "

"The flagship wine from Quilceda Creek offers exotic scents of plum, cassis, loam, coffee and pine sap, a rich and evocative blend. The wine delivers all that is promised and more; it is deep and dense with flavor, polished, focused and persistent. Vanilla, espresso, fine tannins, luscious acids and cascading fruits."

"More pure and focused than the 2009, with a slightly closer to the vest feel, the 2008 Cabernet Sauvignon shows the cooler nature of the vintage and has incredible detail, purity and freshness to its aromas and flavors. A blend of 98% Cabernet Sauvignon and 2% Merlot that spent 22 months in 100% new French oak, it offers classic black currant, spice box, coffee bean, violets and exotic spices to go with an ethereal, layered and seamless palate that delivers massive amounts of fruit and texture without any apparent weight. I thoroughly enjoyed it now, yet it will age for decades. Drink now-2033. "