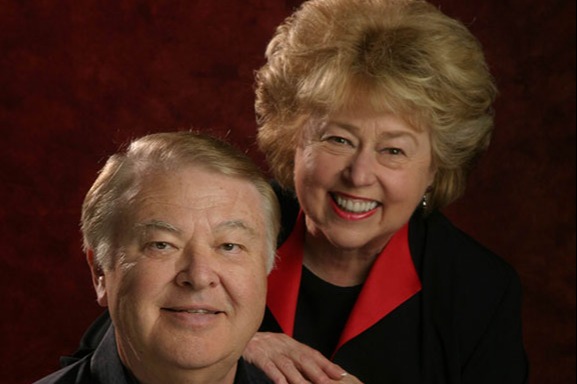 Wine and winemaking run deep in the veins of both Alex and Jeannette Golitzin, founders of Quilceda Creek. Of Russian and French descent respectively, both were introduced to wine at relatively young ages, developing passions born of ancestry, family gatherings and community. Their decision to start a winery in 1978 when the Washington State wine industry was still in its youth is testament to their determination and pioneering spirit. Their unswerving dedication to quality set the standard to which Quilceda Creek adheres to this day.

Alex Golitzin was born in France’s Loire Valley after his parents escaped Russia during the Russian Revolution. His family moved to Paris for the duration of World War II and emigrated to the U.S. in 1946 when they were sponsored by Alex’s maternal uncle, André Tchelistcheff. Alex grew up in San Francisco and has fond memories of visiting Napa Valley where his uncle André, who later became known as the “Dean of American Winemaking,” was winemaker for Beaulieu Vineyards. Alex’s experiences in wine country left an indelible impression.

Jeannette Golitzin, née Palengat, is a San Francisco native. She was raised by grandparents who emigrated to the U.S. from the Northern Basque Country in France. During Prohibition her grandfather made wine in the back of his French laundry in the Sunset District (there were even rumors of selling bottles to San Francisco’s chief of police), and Jeannette has early memories of siphoning wine out of barrels at her grandfather’s direction. But her love of wine was ignited at Sunday dinners during her teens, when her extended family would gather to share a meal, a few bottles and long conversations.

Alex and Jeannette, who were high school sweethearts, married in 1963. Alex had graduated from the University of California, Berkeley and spent two years in the army with ROTC, while Jeannette earned a degree from San Francisco State University. A chemical engineer, Alex worked in the Bay Area for several years, but when the opportunity to move to Washington State for a job at Scott Paper arose, the couple jumped at the chance. Alex had been based at Fort Lewis near Tacoma during his time in the army and wanted to make the northwest their home.

It was the early 1970s when Alex began making wine in the family’s garage in Snohomish. For several years he made trial wines, a barrel a year of Cabernet Sauvignon grapes because that was the only fruit available. But he and Jeannette loved Cabernet, and besides, Uncle André had always told him, “Make one wine and make it well.” At the time, André was consulting for Chateau St. Michelle in Washington, and he visited the Golitzin household several times a year. “André was a guru as far as wine was concerned, and I had his personal phone number,” says Alex. “I could ask him anything I wanted.”

In 1978 Alex and Jeannette established Quilceda Creek, the 12th bonded winery in Washington State post Prohibition. Alex had always planned to eventually sell his wines to the public, in part because he didn’t want to be forced to move with his job at Scott Paper. Quilceda Creek was both a passion and a backup plan.

Quilceda Creek’s first vintage was a 1979 Cabernet Sauvignon, and little did Alex and Jeannette know what a game changer it would be. In 1983 they entered the wine in a competition coordinated by the Enological Society of the Pacific Northwest. Not only did the wine win a gold medal, it won the Grand Prize, only the second time a wine had earned this honor in the competition’s seven years. Wine critics took notice, as did Washington State grape growers, who began offering Alex more, and higher quality, fruit.

Over the next several years Alex continued to make wine in his garage, eventually constructing additional buildings to accommodate his increasing production. He expanded his fruit sourcing, homing in on the Columbia Valley AVA and its sub-appellations as the ideal places to grow Cabernet Sauvignon. In 1986, when he had the opportunity to purchase fruit from the revered Champoux Vineyard (then called the Mercer Vineyard) in the Horse Heaven Hills AVA, he bought as much as he could.

While Alex focused on wine production, Jeannette was busy selling Quilceda Creek wines, particularly in nearby Seattle. She would head to Pike Place Market with her leather bag of wine, visiting wine shops and restaurants. At the time the custom was to pay for wine in cash, even at the wholesale level. “If people knew how much cash I was carrying around I know I’d have been in trouble,” she says. Over the years Jeannette also cleaned lug boxes, cooked for the crew, presided over winemaker dinners and created Quilceda Creek’s charity auction lots.

In 1992 Alex passed the winemaking baton to his son, Paul. Paul had worked alongside his parents for years, and they knew he had the palate, drive and creativity to take on the responsibility. Although Alex continued to have a hand in the wines, it was Paul’s turn, and his parents were delighted to let him take the reins. They are the first to credit their son with taking Quilceda Creek to its current level of excellence.

Today Quilceda Creek has won more accolades for its Cabernet Sauvignons than Alex and Jeannette can count, and they enjoy being close to Paul, the team, and the winery’s state-of-the-art production facilities built in 2003 and 2010. In thinking of their humble origins, the couple say they pinch themselves when they see where Quilceda Creek is today. As the founders of this benchmark producer, they are pleased and proud to have earned their place among the founders of the Washington State wine industry.