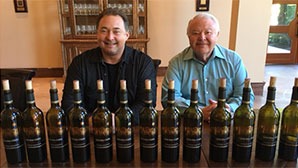 What struck me as I tasted through 12 vintages of Quilceda Creek Cabernet Sauvignons was how these wines create a sense of harmony with every sip, a seamless integration of elements that compares with the great wines of the world. And they do it consistently.

My colleague Tim Fish and I visited the winery north of Seattle earlier this week. Founder Alex Golitzin, now retired, and his son Paul, the winemaker since 1993, poured 2001 to the currently available 2013.

Quilceda Creek has, from the beginning in 1978, focused on a single wine: Cabernet Sauvignon. It's like a Bordeaux château in that regard, concentrating its 142 acres of estate vineyard resources into a flagship wine.

The vineyards are in Horse Heaven Hills and Red Mountain, a four-hour drive east. There the sun shines, unlike often drizzly Seattle. Early on, Quilceda proved that Washington's model of transporting grapes is not only a viable proposition but can make wines of undeniable greatness.

Few other wineries are as single-minded about Cabernet as Quilceda. In the 1980s, knowledgable wine drinkers turned to the Evergreen State for distinctive Merlots when California struggled to excel with the grape. In the past decade or so, the state has produced some of America's finest Syrahs. Still, Cabernet dominates red-wine acreage here.

Since its first vintage in 1979, however, Quilceda Creek Cabernet has shown intensity of flavor within a towering structure. For years, it was almost too much structure. In the early days a wine drinker had to tolerate swarms of gritty tannins to get to those complex flavors.

The tannins are much less aggressive these days. Where early vintages needed two decades to reach an elegant texture, the purity and power of the fruit and savory flavors of the wines in this lineup make a bigger impression than the frame of structure around it.

How do the Cabernets get that harmony? "It's all about texture," says Alex. "When we're doing our blending trials a little bit of the wrong stuff can really mess up the texture. That's one thing we learned over the years."

Few wineries emulate this Cabernet-only stance. At Quilceda Creek the other Bordeaux varieties—Merlot, Cabernet Franc, Malbec and Petit Verdot—go into a larger-production Columbia Valley Red. Yet every winemaker who makes Cabernet in Washington wants to harness the state's natural acidity and sunshine-induced ripe flavors to achieve the kind of harmony and elegance that balance the power of Quilceda's wines. One vintner I visited this week, excited about one of his Cabernets, leaned over to his winemaker and remarked, "This one has that Quilceda silk."

Still, when I asked Alex if he could describe the impact Quilceda's wines have had on other Washington winemakers, he looked puzzled. "I never had anybody come over here to see what we're doing," he shrugged. "I would have done it, snooping like crazy."

All the wines in the (non-blind) tasting felt aristocratic, displaying fruit complexity and savory overtones, and impressive length. My favorite was the 2010. Rich and expressive, layered with cherry, plum, blackberry and spice flavors, it sneaked in a hint of black olive and licorice, finishing seamless and focused and long, still youthful without losing its poise. Exactly what I want from a 6-year-old Cabernet.